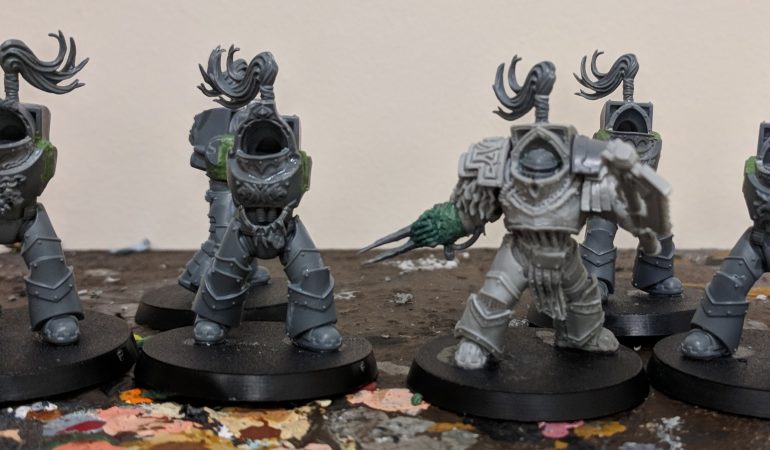 Work has finally begun on my Varagyr Wolf Guard for my VI Legion army for The Horus Era, and I couldn’t be more excited to finally get my teeth into these guys after hoarding bitz for what seems like forever.

Being one of the three unique units (excluding characters) that Space Wolves bring in Warhammer 30,000, it’s been my plan to field a set of these since I started collecting the army, but they’ve always ended up on the backburner for a whole mess of reasons. From a gameplay perspective, they’re not the most exciting unique Terminator unit in the game and generally considered to be pretty overcosted for what they do. And from a modelling perspective, I started work on The Rout sometime in August 2017; not a crazy amount of time following the release of Book VII – Inferno; right as the Thousand Sons and Talons of the Emperor were getting their unique model releases. Figuring that they’d get some cool and flavourful sculpts of their own, I decided to hold off and focus on getting my core of troops finished before moving onto units that already had sculpts (I’ll go into detail on my whole VI Legion in a future Retrospective post).

After months of impatient waiting, ForgeWorld finally revealed their Varagyr sculpts and (some time after) Grey Slayer upgrade kits to a mixed response. For my own part, I found them to be.. not ideal. The Grey Slayers will be addressed in their own post, but my problems with the Varagyr are mostly focussed around the funny looking poses and lack of head and equipment options. There’s plenty about their design to love – the plated armour is styled after Leman Russ’ artificer armour and looks great while the bare heads have a grim, Scandinavian look to them which better fits the 30K VI Legion look than the wild mohawked hair metal look of their 40K cousins.

When all is said and done though, ForgeWorld have produced only five models with very specific and unique poses and bare heads. It had always been my intention to build 8 Varagyr (filling 16 of the 17 remaining seats in a Spartan alongside Leman Russ and his Wolf-kin), and having three completely duplicate models with the same faces in the same expressions just didn’t feel fitting for such a centrepiece unit. Beyond that, they all come equipped with a belt-fed Combi-Bolter and an (admittedly rather handsome) Frost Axe. A classic/standard loadout, but again, does it do this unit of accomplished individuals justice to give them all the same generic weapon loadout, as if they were a basic unit of Terminators? I’ll admit that a Combi-Bolter is better than nothing when your slow Cataphractii armoured Terminators are stranded with nothing in range to chop, but when the unit is spending all of it’s time in a Spartan, then (hopefully) assaulting from the vehicle to a close combat with Leman Russ.. well, I’d rather take the option for a second Frost weapon for the extra attack – or the flexibility to take a Thunder Hammer or Power Fist and use accordingly.

With that, my fate was sealed; I was going to build my own Varagyr.

I’ve taken some inspiration from The Upplander‘s plastic Varagyr conversions (I’m especially thankful for his tip on using Ork Boyz for the plumes of hair on the armour), and my aim is to end up with a set of 8 Varagyr that live somewhere between the mildly ostentatious ForgeWorld sculpts and the artwork from Book VII – Inferno.

The bitz count for these guys is somewhat staggering, and I’ve never in my life been so thankful for bitz resellers on eBay, especially those that deal with ForgeWorld packs as well as plastic sprues. I’d rather like to bring these guys to an Armies on Parade at my local Games Workshop this year, so I’m trying my hardest to avoid using any aftermarket conversion packs, which doesn’t exactly make life any easier. The total pieces involved in the conversion are:

This isn’t my first conversion to come from a number of kits, but it’s taken the most specialist parts orders thus far.

The Thegn (not pictured, as he has not arrived yet) has a standard FW Varagyr model body. One thing I didn’t like about the FW Varagyr kit was how unclear it was who was in charge. I hopped onto eBay and picked out the least ridiculously posed model from the set and decided his more ornate armour makes him a perfect squad leader model among my more ‘plain’ plastics.

This makes seven legs and bodies. The last Varagyr body (and the one pictured front and centre above) is a Legion Praetor body I had spare. I’ve had to file off some of the more ornate features on the armour (messily presently, that’ll require a bit of a cleanup), but it’s a solid body otherwise. Less duplicate poses and less bits to buy is always nice, right?

For arms, I’m using the right arm of the Space Wolves Varagyr models, courtesy of eBay. As much as I’m not a fan of the gangly fur, I’m going to need to file down and green stuff over the leather centurion straps on the other shoulders and tabards anyway for fur, and I really like the Leman Russ-esque runic detail and legion symbol. For the left arm, I’m using a mixture of arms from the plastic kit (in the cases where I’ll be using power/chainfists), arms from the Cataphractii power axe kit and also three more Varagyr kit arms that I ordered from eBay – these were actually less of a style decision (as there’s not much in them) but more of a necessity, after I discovered too late that the Legion Cataphractii Power Axe Kit didn’t come with the top part of the pauldrons (presumably so you could use your legion-specific ones) and I couldn’t find any other pauldrons on eBay or bitz sites to make up for the extra three guys in the squad. Whoops.

So, that’s my thoughts on Space Wolves Varagyr in terms of models, equipment and my approach to converting my own unique take on them. The next step from here, now that I’m finished the torsos, will be to get the weapons arms converted and attached, followed by green stuffing furs under the pauldrons and over the tabards, and then it’s onto painting.