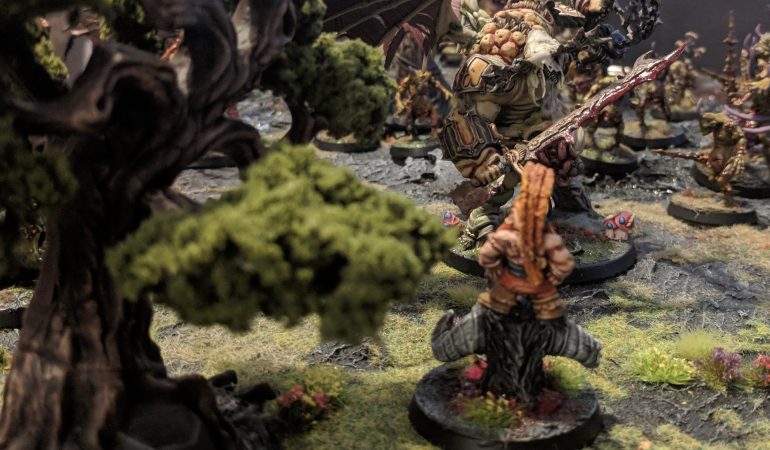 As ever, the direction my hobby takes is ever fluid and unpredictable. With only two more units left to finish of my Space Wolves and a Horus Heresy event at Warhammer World under my belt, it should have been trivial to hitch a ride on the hype train and make that big ol’ photo happen. Instead, I’ve done just about everything but. Next in the pipeline for this blog is probably going to be a post about how I’ve gotten myself sucked into the Middle-earth Strategy Battle Game reboot; I’d agreed with some friends at my local club to put a Battle Company together, and somewhere along the line I’ve gotten sucked into building up an 800pts Rivendell army for the full game. It’s early days, but make no mistake – this is happening, however misguided or unintended.

But I’m getting ahead of myself. Before any of this would come to fruition, my next big distraction was building an Armies on Parade display board, “The Death of Hope”.

Finished with about a month to spare, or make any necessary adjustments or fixes, this is my display board for my venerable and well-loved Maggotkin of Nurgle army, the Malign Order of Despair. Please note that while the pieces themselves are painted, etc. my actual layout and in some cases miniature choices way swap out if I think it isn’t working for whatever reason or I have a better idea. It’s still a month until October 13th, after all!

So, what are we actually looking at in this very, very busy photo? Well, I’ve annotated with with numbers for ease, but before I go into the individual pieces, I want to talk about the board itself as a concept and what I tried to achieve1. I had originally planned to display my Space Wolves for Armies on Parade, with my Warhound Titan as the centrepiece – as it so rarely gets to come out of hibernation and into the wilds. However, the combination of attending the Invasion of Lannar at Warhammer World (and thus getting to take my Warhound out and about in an actual gaming setting) as well as simply having no inspiring ideas for the board itself really killed the idea for me, as part of the appeal of this project for me was physically working on a board/terrain project as well.

I did, however, have an idea for a Nurgle board. My original concept saw a small number of my Stormcast Eternal models coming out of Hibernation and doing battle with a small number of my Maggotkin in the Realm of Death, with the landscape shifting in a tug of war between blossoming life and rotten decay. In the end however, when I dry tested my miniatures on a flat 2×2 board, I came to the conclusion that there would not be space two forces and the terrain that I wanted. This idea eventually morphed into the board you see now – a glorious last stand of a solitary Daemon Slayer (Position 2) as he faces down his inevitable doom. Around him and the Warscryer Citadel (an awesome terrain piece that I absolutely had to include) at Position 1 is the last vestige of life, with bright green static grass, floral tufts and a tree yet rich with green foliage. The ground below him however becomes more sparse with the flock and static grass as we move further towards the Nurgle side however, becoming browner until deader until it looks much like the bases of my Nurgle army, with red brown spores and sparse, dead grit. The tufts themselves shift from colourful floral tufts, to darker green tufts down to the same wasteland tuft that adorns my Maggotkin’s bases.

I knew the board had to have a water feature, as this is something I’ve played with a decent bit now on my Nurgle miniatures. My Great Unclean One at Position 4 was a must-include, and I decided that I wanted him to inlay into the water itself so built a plasticard and blu-tack barrier around where his base would sit to let him blend in a little better. Additionally, I built a dock made from the same Goblin Town sprue for his base to sort of “extend” into to a degree, and he faces into the rest of the board, greedily eyeing up the unfolding conflict.

It was the inclusion of the water feature that inspired the idea behind one of my favourite inclusions on the board – at Position 5 we have Gutrot Spume arriving with the Slime Fleet. I have to say, I’m really happy with how this particular piece turned out in the end. The Ship was made from the Gloomtide Shipwreck, using the hull’s ground piece on the bow to give it a floor, and Citadel Vines as seaweed to cover up any of the holes with any remaining justifable as because Nurgle. I was really nervous covering up the front statue with green stuff, but in the end I think I did a decent job of the Drone Maiden, with the verdigris brass paint covering up for my imperfections.

The rest of the board at Positions 3 & 6 is.. well, pretty much miniatures. However many Plaguebearers that I can cram onto the board, Horticulous Slimux and his Beast of Nurgle and my Lord of Afflictions bringing on a swarm of Plague Drones. My Harbinger of Decay also sneaks on from the West, bringing with him a sneaky reference to the World That Was2.

All-in-all, I’m pretty happy with my first ever entry for Armies on Parade. I managed to cram on a few miniatures that I’m pretty proud of onto a scratch built board with some cool terrain pieces and a little bit of a narrative to it to boot. If I were to do it again, I’d probably raise the whole thing off of the board a little with styrofoam to give it all a little more gravitas, and I think that putting the display’s name and perhaps a brief piece on the narrative as a background piece might also help with matters too. There’s a few things I’d still like to tweak in terms of mini choice, numeracy and positioning but there’s still time for these sorts of things before Parade Day, I suppose.

With the work done, I’m really looking forward to Parade Day and getting my board on display. It would be nice to win a medal, even a Bronze, but I’m not holding out much hope given that this is my first ever entry. Worst case scenario, I come away from the experience with having had a good excuse to paint Gutrot Spume finally, along with my Beast of Nurgle – both of which were a blast to put a brush to – and a few really awesome terrain pieces for my Age of Sigmar terrain collection.

Either way, it’s back to painting Rivendell Elves with me. I’ll leave you with a few more pics of different angles of the board below. Thanks for reading, and happy wargaming! 1 And whether I succeeded, I suppose, is up to the public!

2 Because neither Bögenhafen or Middenheim would fit on the sign