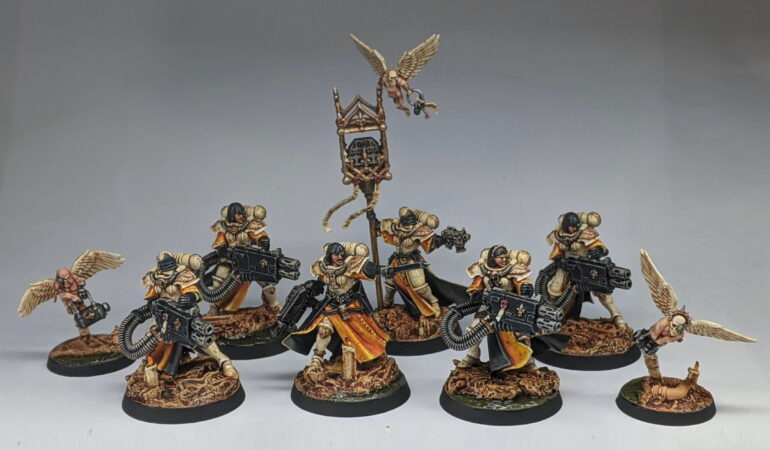 Welcome faithful of the Emperor to Part Three of The Emperor Protects, a series of posts following the growth of my Adepta Sororitas Order Minoris, the Order of the Dying Light. In this instalment, I’m adding some heavy firepower to the army alongside a few other bits and bobs for utility. This post going to be something of a departure from the first two. While I might have a few comments to make here and there (primarily regarding construction) for a couple models, the vast majority in this post will be ‘more of the same’. Rather than repeat myself, I’m going to use this opportunity to talk about why I forsook my cardinal rule about not buying (just about) everything for a new army right away this time, and why it’s important to plan ahead with Games Workshop’s modern plastic kits.

But before we get into all of that, this is my first post of 2021 and – as has been my tradition the past couple of years – I’m going to start by rattling off a few fun statistics about my year in the hobby.

And that was that, another year of hobby in the hole. I have to say, I’m really looking forward to getting my teeth into my 2021 projects, with more stuff in the pipeline for my Adepta Sororitas, new crews for Malifaux and gosh darn it maybe just maybe this will be the year I finally paint a Thunderhawk Gunship or Smaug, Desolator of the North. Maybe.

Well, that’s enough naval gazing – let’s get back to the Sisters!

The new Adepta Sororitas plastic kits are, by and large, pretty miraculous things to behold. The miniatures are beautifully detailed, posed in a diverse array of cinematic freeze frames and come with an absurd number of head options. As terrific as these kits are, however, some of them benefit massively from a bit of forward planning if you don’t want to end up with a bunch of duplicate miniatures – in particular, the Battle Sisters and the Retributors.

As far as plastic heavy weapons kits go, the Retributors kit is pretty solid. All told, it makes you a Sister Superior and 4x Sisters with Heavy Weapons. The Sister Superior has a few options, which is nice, but regardless of what you equip her with, she always kind of goes together the same way – melee weapon pointed toward the sky and something in her off hand. Additionally, although the Retributors kit comes with 4x Heavy Weapon Sisters, it only builds 2x of each option1 – meaning that if all you’re interested in is Multi-Meltas (i.e. the only heavy weapon not available in the Battle Sisters kit), then you need at least two boxes of Retributors. This can be a little irksome, especially so when you consider that Space Marine Devestators2 are packaged with literally double the number of heavy weapon options (still in sets of two, mind you). Now, if money is no object, you can always run out and grab three boxes of Retributors and – following my Retributor Build Matrix chart below – you can get a ‘unique’ model for each one of your heavy weapons too. But before you run out and blow £97.50 (or £81.96 from Element Games3), it’s worth noting that not only does a box of Battle Sisters build both a Heavy Bolter and Heavy Flamer, but the body for the Heavy Bolter can even support one of the heavy weapons from each pair in the Retributor kit out of the box, no conversion required.

I’m going somewhere with this, I promise.

Speaking of the Battle Sisters kit, this is where things get a little more complicated. And I do mean complicated here – not ‘bad’. As a value proposition, it’s actually fairly reasonable. Heads aside, this kit lets you upgrade no less than 7 of the boltgun armed Battle Sister models with some form of special/heavy weapon or equipment – and there’s even several ranged and melee weapon options for your Sister Superior to boot. Without employing any conversion, here’s what the kit builds:

So, where’s the complexity here? Well, here’s a few things to consider:

So, what can we take away from this information? Well…

Whoa, okay, so that’s a lot of information to consider. Like I said, the Battle Sisters kit comes with a crazy number of options. It builds no less than three separate units with their own options and limitations and even shares some overlap with the Retributor kit. This creates a lot of choices and a lot of opportunities. It’s easy to just buy a kit per squad and just build what you need, but with a bit of forward planning you can get a pretty exhaustive and feature complete set of miniatures – including Battle Sisters, Dominions, Celestians and Retributors with all manner of equipment options – from five boxes of Battle Sisters and two boxes of Retributors.

Alright, that’s enough talk. Let me show you my data.

The above chart details what I believe to be the optimal miniatures to build from each kit in what order to maximise your options and possibilities while meaningfully minimising unnecessary duplication of pose and loadout. Now, keep in mind here that this is only what I believe to be the optimal build order. I am coming from the perspective of a gamer, although equally from the perspective as an army collector. I’m not skimping out on Storm Bolter options or going crazy on Bolter armed Battle Sisters – realistically speaking, my Battle Sisters will mostly be run in five model MSUs with two Storm Bolters each so as to free up points for more interesting things – but it’s good to have a reserve of Bolter armed Battle Sisters to beef up the squads if points allow. Likewise, I’m building four of each special and heavy weapon because, generally, I find squads more effective when they’re all geared a certain way and I want to be able to run different Retributor and Dominion loadouts. With 14x Boltguns and 10x Storm Bolters, I’m able to run a Battalion with 3x MSU Squads (Chainsword Superior, 2x Bolters, 2x Storm Bolters) with enough left over to run a 10x Sister Dominion Squad with 4x special weapons of my choosing and 5x ablative wounds – and 3x bolters spare to beef up a Retributor Squad or something. In a pinch, I could even run a brigade – although one squad would have to live without Storm Bolters4, while 3x others would have an upgrade of some kind on the Superior.

As you can probably tell, this build plan is something that I’ve been obsessing over for weeks now, maybe months. Strictly speaking, this isn’t exactly how I built my miniatures on a box per box basis. I built my first box without too much forward planning as I wanted it to be able to double as a Kill Team in the short term (and figured the first box wouldn’t have too much of an impact on the other six), then started writing out a plan from there. My initial build plan was broadly the same as the final draft, but I did find myself making changes and tweaks as put together more of my boxes and began to notice opportunities and limitations that I hadn’t initially foreseen. Heck, there are even a few miniatures I went back and changed (4x Battle Sisters from Bolters to Storm Bolters) while writing this blog entry. Talk about cutting it fine. Only when the dust had finally settled and all of my choices were built and finalised, I went back through my Frankenstein’s Monster of a list and moved some choices around such that the individual boxes had more of a theme to them (the flamer box, the meltagun box, etc), which helps make the build order make a bit more sense to read.

There’s a few caveats and edge cases in the finalised build order that could use a little explanation and clarification. These are as follows:

And that’s about it, really. That’s what I consider to be the optimal build order for Battle Sisters. If you follow all of this advice – and you’re careful with your choice of heads and the direction they point – you should be able to create all 60 of these Battle Sisters miniatures as Battle Sisters, Retributors, Dominions and Celestians. Each will have a useful array of weapon loadouts and equipment options and very little in the way of duplicate miniatures. It’s not without it’s downsides, of course. You’re staring down the barrel of £240 worth of plastic kits in one gulp – even more if you also pick up a couple boxes of Seraphim/Zephyrim for the extra spare bits (which I do recommend). But hey, unless you’re into converting Superiors, you’re going to need at least three boxes of Battle Sisters for your Troops to fill out your first Battalion anyway – and with the latest buffs to Multi-Meltas in 9th Edition, who isn’t going to want a squad of these coming in from reserves?

Hopefully this came out as helpful, understandable information and not the ramblings of a madman; I’ve been mulling this post over in my head for so long now that I don’t think I can tell any more. If anyone out there is starting a new Adepta Sororitas army finds this build guide useful, or just interesting food for thought please do let me know in the comments section or shoot me a little email, I’d love to hear from you.

Until then, thanks for reading and happy wargaming!

1 This is mildly complicated but the Retributors Heavy Weapons come in two distinct poses with a variation of each – i.e. A/B are the same poses but with different details and C/D are the same poses with different details. This is important as the kit supplies two of each heavy weapon – one to fit each pose. This means you can’t have Sisters A/B armed with Multi-Meltas and Sisters C/D armed with Heavy Bolters – it has to go Melta/Bolter and Melta/Bolter (or the other way around). Like I said, confusing – thank goodness someone made a chart, EH?

4 For this reason, I considered making my Bolter/Storm Bolter divide 12/12 rather than 14/10. I ended up going 14/10 instead as having excess minimally armed Battle Sisters felt a lot more flexible (as they could be dumped in Battle Sisters Squads or Retributor Squads if I had points to burn) rather having models simply to appease this one very fringe situation that might not ever come up. Besides that, running a MSU Brigade was always going to be a little sub-optimal given that I only had 3 (arguably 4) no upgrade Sister Superiors. Should I ever find myself in desperate need to fill an MSU Brigade, I’ll probably just bite the bullet and buy another couple boxes of Battle Sisters for the Sister Superiors, if nothing else.